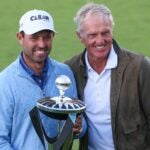 For much of the 1970s, identifying the best golfers in the world required a little more than a glance at the PGA Tour money list.

The men’s game was dominated by Americans, and they competed mostly on US soil.

By decade’s end, though, the balance of power had fled to shift.

With international stars such as Seve Ballesteros, Nick Faldo, Nick Price and Greg Norman shining in events around the globe, the ranking process was no longer so simple.

A new system was required.

In 1986, what we know today as the Official World Golf Ranking (at the time it was called the Sony Ranking) was born.

Its founders were the five families of golf (the USGA, the R&A, Augusta National, the PGA Tour and the PGA of America), along with the European Tour Group and the International Federation of PGA Tours. But over the years, the tent expanded. Today, more than 20 tours around the world stage events that carry OWGR points.

For more of this backstory, you can visit the OWGR website, which lays out the origins and evolution of the ranking. While you’re on the site, you can also learn about the math behind the system – how points are allocated to events by calculating their strength of field.

What you will not find, however, is information on another question: How does the OWGR determine which tours deserve its validation in the first place?

The site offers no explanation.

For most golf fans, this has never been a pressing topic.

But it is relevant today, given the recent shakeup in the game.

This past weekend, Norman, the CEO of LIV Golf, announced that the controversial Saudi-backed rival circuit he leads will apply to have its events made eligible for OWGR points. Earning that status is important to LIV because the rankings are gateway for players into the four majors and other high-profile PGA Tour events. An undecided golfer might feel more comfortable joining LIV with the assurance that he would still have a chance to qualify for those marquee events by way of the world ranking.

LIV executives argue that its recognition by the OWGR is important to the OWGR, too, if the world ranking is to remain credible, accurate and up to date.

In an interview with Fox News, Norman said that LIV was putting together a “compelling application” and working closely with OWGR committee members “to understand all the components of what you need.”

OK, then. About those components.

The decision-makers declined to say.

“The Official World Golf Ranking does not comment on the application process nor on any individual applications it may or may not have received for admission into the Ranking,” a representative from the organization told GOLF.com by email.

Requests for comment from the PGA Tour, the PGA of America, the R&A, the USGA and Augusta National, all of which have representatives on the OWGR board, were either declined or ignored.

Nor was Norman made available to share what he knows.

But another LIV executive who has been involved in the OWGR application process and who requested anonymity was willing to discuss how the review process works.

According to the executive, a tour seeking OWGR recognition must meet upward of 15 criteria, nearly all of which he said LIV meets, with others falling into a “gray area” that LIV believes it can get past. For starters, the applicant must be proposed for consideration by an existing tour that is already in the OWGR fold. The Asian Tour, in which LIV has invested hundreds of millions of dollars, will check that box for LIV, the executive said.

Several other OWGR criteria relate to the scheduling and formatting of events. To be eligible for OWGR points, for instance, a tour must operate at least 10 events a year.

Those events must have a minimum purse of $ 50,000 (LIV clears that bar easily) and an average field size of 75 players. While LIV’s invitational events, including its inaugural tournament outside London earlier this month, are limited to 48 players, its international events will feature 144 competitors, bumping its average field size above 75, the executive said.

With a few of the requirements, the executive acknowledged, “there is some gray area,” but in those cases, LIV believes that precedent is on its side.

Take, for instance, the OWGR requirement that events be a minimum of 54 holes with a cut after 36 holes. LIV events do not have a cut. But the Tour Championship, the WGC-Dell Technologies Match Play and the Hero World Challenge are also cut-free, and they all dole out OWGR points.

There are other criteria, the LIV executive said. The OWGR requires that a tour provide a pathway for its players onto the full-member tour that is proposing the application. LIV could meet that requirement, the executive said, by guaranteeing that its top five finishers receive an Asian Tour card (whether those players would opt to play on the Asian Tour is another matter). The OWGR also requires that a tour hold a qualifying school before the start of the season or offer a qualifying process into each event.

LIV will be able to check that box, the executive said, through a concept it plans to implement within the next few years, after its switch next season to a league format with 48 full-time committed players and 12 committed teams. As part of that concept, the four lowest-ranked players will be relegated and a separate event will be held that will provide a pathway into the league.

Another hurdle LIV will need to clear is an OWGR requirement that a tour be in operation for at least a year before its events can be eligible for world-ranking points. LIV staged its first competition only weeks ago. But here again, the LIV executive said, a case could be made that other tours have been exemplified from this rule in the past. It’s an argument, the executive said, that LIV could put forth, anyway.

On the other hand, players who turned in poorer showings, including Sergio Garcia and Phil Mickelson, would have dropped in the OWGR.

Bottom line: It’s not hard to see how LIV’s application for OWGR recognition could get complex and prickly.

Another potentially fraught matter is the make-up of the OGWR board, an eight-person body that includes PGA Tour commissioner Jay Monahan.

Norman has already suggested publicly that Monahan has a conflict of interest and should recuse himself from any vote on LIV’s application for OWGR recognition.

Monahan has made it clear what he thinks of LIV. Where other OWGR executives stand on LIV has been tougher to decipher.

At the US Open last week, USGA CEO Mike Whan, who also sits on the OWGR board, was asked whether playing by the rules of golf was a requirement for an event to qualify for world-ranking points. Whan pleaded ignorant to that, and more.

It appears they will be soon.

A golf, food and travel writer, Josh Sens has been a GOLF Magazine contributor since 2004 and now contributes across all of GOLF’s platforms. His work has been anthologized in The Best American Sportswriting. He is also the co-author, with Sammy Hagar, of Are We Having Any Fun Yet: the Cooking and Partying Handbook.