According to the weather report, temperatures in the Phoenix metro area were 10 degrees above normal. Meanwhile, about 30 miles to the northeast, I was walking a dirt-road through the Four Peaks Wilderness. The road’s elevation is about 4000 feet above that of Phoenix, so the temperature was actually quite comfortable.

The next morning, I reached the Bushnell Tanks Trailhead, which is where I intended to hitch a ride to Payson. Highway 87 is a high speed, four lane road, and hitching at the roadside would be dangerous. (The closest PCT equivalent I can think of is the road to Tehachapi.) My plan was to scrounge a lift from anyone parked at the trailhead. As luck would have it, I met a retired couple who were just getting back to their truck. They’d driven up from Mesa for an early-morning bike ride. They drove me 30 miles to Payson, which is in the opposite direction from where they live. A massive thank-you to Joe and Sherri.

Payson is a big place, and a long way from the Arizona Trail. There was a plenty of traffic leaving town the next morning, but I’m pretty sure I looked more like a homeless person than a hiker. Eventually, a car stopped (another big thank-you: Mark and Barb) and gave me a ride back to the AZT.

The next resupply destination on my itinerary was Pine, and I planned to get there after four days in the Mazatzal Mountains. Leaving Highway 87, during the climb, I realized I was nearing the trail’s halfway point. South of that point, the AZT is mostly low desert, interspersed with a handful of sky islands. To the north, the trail briefly drops below 5000 feet only twice: the East Verde River and the Grand Canyon.

The following day, I also left low-desert temperatures behind. The weather most days followed the same pattern: cold for the first few hours, comfortably warm after that. If I happened to camp in a low spot, the mornings could be frosty, so I kept my filter in my sleeping bag overnight. I also kept my phone under my pillow, but woke every morning before my alarm. There was no need for an alarm clock when some extremely vocal birds were awake before me. I subsequently discovered that the tweeting, trolling tree-dweller most likely responsible was the Northern Mockingbird. Its song reminded me of one of those car alarms that switches between a handful of different sirens every few seconds. Except this species seemed to know at least 50 different calls. Once those guys * were awake, I was too.

* Most nocturnal singers are male.

After four days, I left the AZT at the Pine Trailhead, which is less than a mile from town. I stopped at the Early Bird Café, and ordered a stack of blueberry pancakes. The waitress warned me that two would probably be enough, but I was confident I could manage all three. I was wrong. The pancakes were excellent, but my stomach seemed to have shrunk.

After breakfast, I resupplied at the Ponderosa Market. The staff were helpful, and I quickly selected all the items that would keep me from starving before I reached Flagstaff. I was deep into hiker-hunger territory, but resisted the urge to buy more food than I could carry. I packed away all my purchases at the table outside the store while chatting to some hikers I’d last seen almost two weeks ago. We parted ways, and I walked back along the main road.

The trail climbed gradually for most of the afternoon, providing good views of the cliffs ahead and the Mazatzals to the south. I camped a short distance from Webber Creek, and continued following the base of the cliffs the next day. Mid-morning, I started the 1000 foot climb up the Mogollon Rome, and at the top, entered a different world. No more desert vegetation, just dense pine forest. Smooth, flat trail. Slightly cloudy, quite breezy, a little cold.

A kind of magic

Hiking across the Colorado Plateau was cooler, flatter, and easier than most of the trail that came before it. The high-speed terrain meant I could cover 10 miles before 9 AM each day, add an extra few miles to my daily target, and still be finished by early afternoon. However, if I’m being completely honest, the trail became less interesting. Apart from the occasional meadow, I spent most of my time among the trees. Views were rare, but wildlife was plentiful – I saw deer, elk, a pair of pronghorn antelope, and evidence of the Easter Bunny.

At my campsite near the Horse Lake Trailhead, I found a small, green, plastic egg containing a mini Kit Kat Lemon Crisp. Almost 50 calories, just 12 days old, and only slightly melted. It tasted fine though, and trail magic is seldom more magical than when it’s provided by a man-sized rabbit. 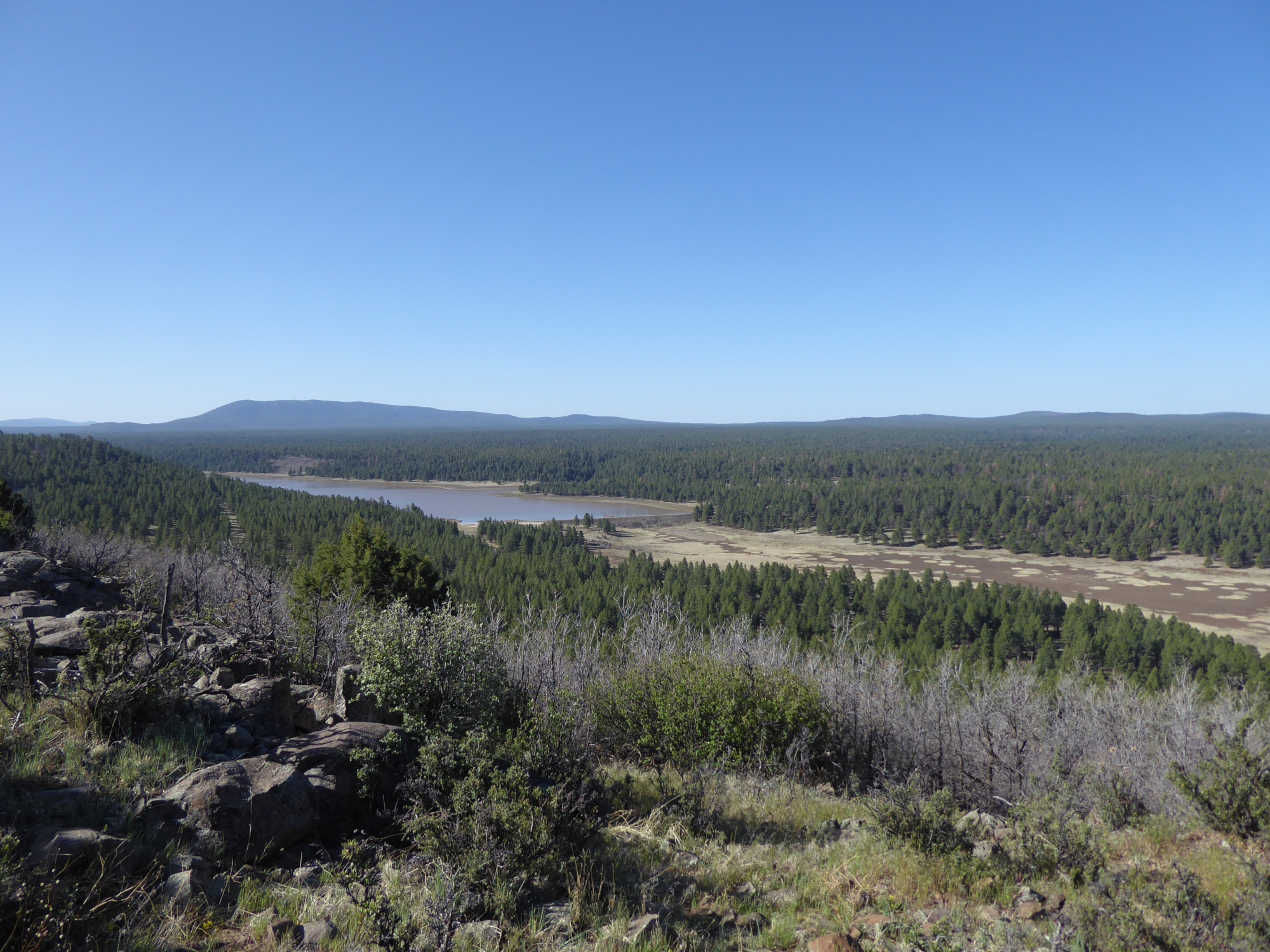 Briefly emerging from the trees above Upper Lake Mary.

By the time I was within five miles of Flagstaff, I was almost a day ahead of schedule. I felt like I’d be wasting time, and rationing my food unnecessarily if I stuck to my itinerary. So as soon as I had a cellphone signal, I booked a hotel room. I followed the Passage 33 alternate, planning to take advantage of nearby accommodation and resupply options.

I couldn’t check in for another two hours, so on my way to the hotel, I stopped at a gas station. I bought an enormous apple fritter and a couple of drinks, then sat down in the shade to enjoy them. A passing customer recommended a nearby shelter where I could shower and spend the night, but I told him I’d booked a hotel room. We started talking, and it turned out that the passerby, Dan, was a 68-year old Vietnam veteran who’d once been homeless. He now lived in an off-grid tiny house on a plot of land north of Flagstaff. He was also slightly obsessed with conspiracy theories.

On day four of the AZT, I met a conspiracy theorist outside a convenience store in Patagonia. That day, I made my excuses and departed. This time, I felt like I should stay awhile. I steered the conversation away from conspiracies as much as possible, and discovered that Dan had led an interesting, if sometimes difficult, life. When I finally headed for my hotel, I was glad I’d taken the time to listen. I was also a little annoyed on behalf of vulnerable people like Dan. His biggest concerns stemmed from misinformation he’d found using his only connection to the outside world: his phone.

When I was in towns along the PCT, I used my phone to check my messages, the latest trail closures, and the weather forecast. I didn’t really need any other information, but mostly out of habit, I’d check Google’s news suggestions. The news was usually bad, so when I started the Arizona Trail, I decided not to get any updates. That Saturday afternoon in Flagstaff was the first time in several weeks that I’d given any thought to war, politics, or Elon Musk’s latest exploits. And since I didn’t feel any better as a result, after chatting with Dan, I returned to my uninformed bubble. 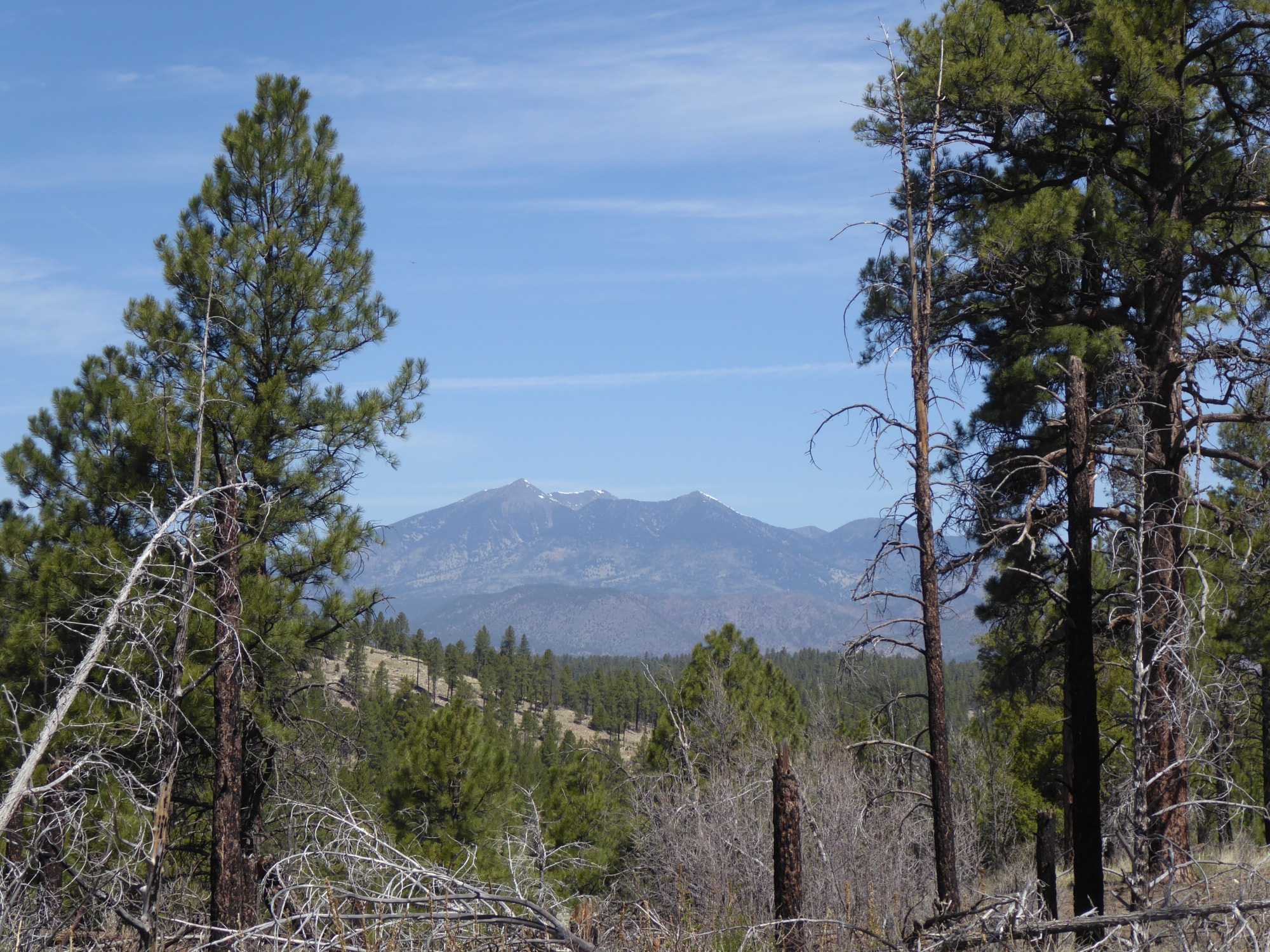 Nearing Flagstaff, with Humphreys Peak in the background.